Published by mgilmore on January 7, 2018

I cut myself taking off the cover to an inexpensive razor recently and realized concepts I apply frequently to software design and usability testing would be relevant to this situation. My assumption is that the amount of plastic used for the cover was reduced to a minimum to save on costs, both manufacturing and shipping. Since there was a safety factor involved, I thought it was worth exploring how the design flaw could be caught before it could affect consumers.

The sketch below shows the two pieces involved: the razor stem and cover. 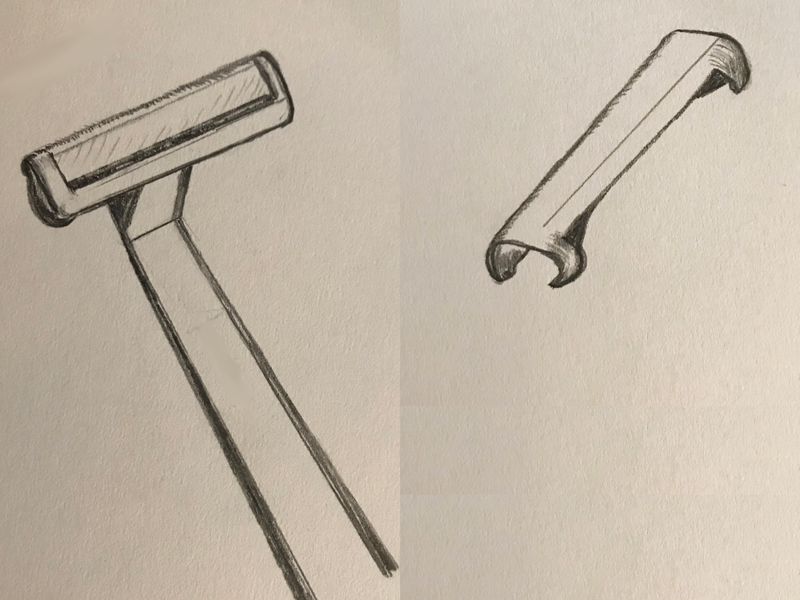 The cover had two small tabs, one on each side along with a shallow arch extending across the side of the cover.
The issue with the cover is that when pushing it off the razor, either from the side or center, the thumb will graze over the blade once the cover is removed and can cut someone’s finger. 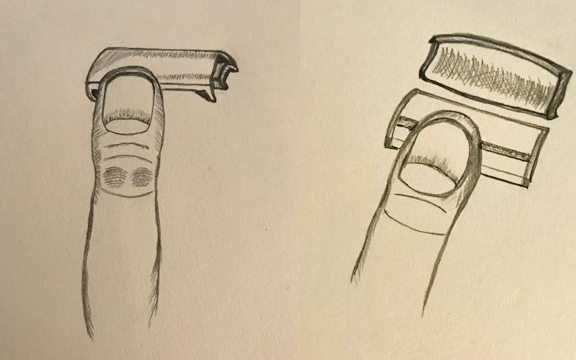 Design research and human factors analysis would provide valuable input into the initial design. Usability testing provides insight into the accuracy of the design assumptions and eventually, the test data can be used to perfect the design.

These are some of the questions usability testing can answer:

The last point is an important consideration in planning usability tests.
Incorporating time for the user to interact with a product without any prescribed tasks often generates very useful data that can be complemented by observations drawn from directed tasks where users are asked to work with a specific feature to accomplish a goal.

Since this is a physical product other consideration would applicable such as:

Universities and Government agencies such as OSHA and the military have produced a lot of ergonomic data such as the average thumb and finger sizes and the expected force that can be applied when pushing levers.
Some useful information can be found at these links:

When defining the test plan, it is important not to introduce any bias into the test that would result from educating the user on how to interact with the product, or in this case, how the designer intended the user to remove the razor cover. Secondly, it is helpful to create the scenario for the user that best emulates how the user would use the product in real life.

In this scenario, the discrete nature of the razor cover interaction may not require that the test be conducted in a staged bathroom setting. However, it could be that the humidity of a bath room can make the razor cover slippery. Contextual attributes such as this help the usability test team decide if they need to invest in recruiting a sample of users to use the product in a realistic environment.

Muscle memory is often involved when a user is performing a common task. In the article by Ainslie Johnstone (2017) and referenced below, an interesting description of how the memory of motor skills is retained and retrieved. According to the article, a motor skill acquired by repetition is stored in a distinct part of human memory call the Procedural System; these skills can be performed in an unconscious manner. This would be an important consideration when defining the usability test.

In regards to the motor skills to remove a cap, by asking the user to perform several common tasks performed before or after shaving, the user may be more likely to behave naturally in the manipulation of the razor.

These are just a few thoughts on applying best practices of software design to physical objects. In the next blog post, I’ll document the steps I took to incorporate some of the ergonomic data referenced above into design goals and prototypes.